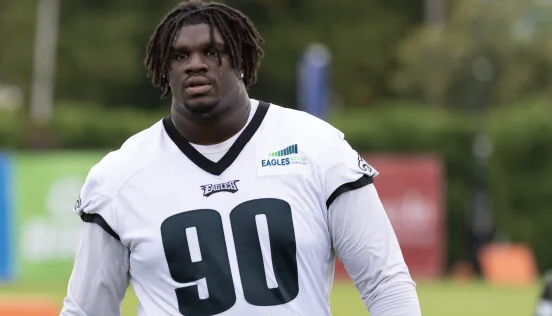 The Farzy Show with Marc Farzetta has a twofer today for Philly Sports Fans. Austin Krell of The Painted Lines will talk about the Sixers and Kevin Durant. Also, Brandon Lee Gowton of Bleeding Green Nation discusses all things Philadelphia Eagles before the upcoming preseason game. The Phillies came from behind against Sandy Alcantara to snag a Game 2 win. This win extends their winning streak to 7 games. All things and more on The Farzy Show!

First and foremost, Farzy dissects the come-from-behind win starting with the Brandon Marsh single. The Phillies went full-throttle, and Seranthony Dominguez clinched the save. Farzy raves about Phillies catcher and FOTS Garrett Stubbs killing the Marlins mystique. In yesterday’s game, the Phillies had multiple defensive plays that kept the score close. Marc loves that even if the Phillies are down, they will have a run in them somewhere. Also, Noah Syndergaard made his second start going 6 IP, 6 H, 2 R, 2 ER, 2 BB, and 4 SO. Better than his first, but not great.

Next, Marc discusses John Kruk and Tom McCarthy poking fun at Keith Hernandez during the Phillies game broadcast. Apparently, he texted Kruk and TMac, and he was not pleased. Phillies Phans can laugh at the absurdity of Hernandez and enjoy great times watching the team they love. Farzy highlights the Jimmy Rollins tweet about the Phillies having it! He also reiterates Brian Westbrook’s support of the city getting behind you when a player is doing good or bad.

Then, Farzetta talks about the Eagles, specifically, the viral ice skates video. Jordan Davis put Cam Jurgens on ice skates for one rep. Davis does not like the video because it seems very one-sided, which is not true. On the other side, HC Nick Sirianni addresses the media regarding the Jason Kelce injury. He believes it will not be too bad, and there is plenty of time to give him rest to address the issue. Hopefully, Jason Kelce will start Week 1 for the Birds.

Furthermore, on the Rothman Orthopedics Guest Line, Austin Krell of The Painted Lines discusses KD and the Sixers. Krell says that the deal for Durant is in an exploratory phase. However, when a team has star players like Embiid and Harden, other star players will show interest in moving to that team. If the Sixers want to hold onto Maxey and get KD, then Durant would have to restrict the trade only to the Sixers. This dream scenario is improbable. Krell believes Harden is primed for a rebound season to impact the Sixers’ season significantly. Obviously, Durant would create a big 3 of Harden, Embiid, and himself. Marc desperately does not want Tyrese Maxey to get traded.

Moreover, on the Rothman Orthopedics Guest Line, Brandon Lee Gowton from BleedingGreen Nation talks about the Eagles. Gowton and Farzetta agree that Hurts needs to prove himself this year and is fighting for a contract. Brandon discusses his philosophy when judging the QBs and players in training camp. He thinks Nakobe Dean has not shown any flashes of greatness yet, so pump the breaks because he is a rookie. Gowton praises AJ Brown thus far in his Eagles tenure. Also, he believes Miles Sanders is killing it in his contract year.

Additionally, Gowton disagrees with Farzy on Jalen Hurts. Gowton thinks Hurts will be done after this season. However, Farzetta believes it is hard to bet against a guy with an incredible work ethic and many weapons. Overall, Brandon believes the Birds’ schedule is easy, and Gannon always beats the bad teams with the Eagles’ defense. Brandon Graham has returned stronger than ever, and Gowton would take the over in wins. Yet, he is not sure how far they will go.

BlueChew sponsors the chat check on Social Media, answering all the fans’ comments and concerns about Philly sports. Fans support Jim Gardner and do not like Keith Hernandez. The fans debate on whether or not to trade for KD. The trade will have to include Maxey if it does happen.

Finally, on the Morning Rush by Sky Motor Cars, the Phillies have another sweep opportunity this afternoon at 1:05 PM. Kyle Gibson is on the mound against Edward Cabrera.