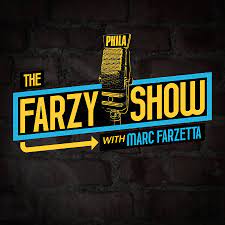 Farzy is up and at ’em this Tuesday morning, ready to discuss all Philadelphia Sports on The Farzy Show with Marc Farzetta, joined by Liberty Ballers Sixers expert Paul Hudrick.

To begin the show, Farzetta discusses the mindboggling nature of the NBA’s Most Valuable Player Award, going to Nikola Jokic over Joel Embiid. The MVP award goes to the best regular-season player, but it does not feel like Joker should be winning back-to-back MVPs. Marc plays a clip of Stephen Jackson on how Embiid got robbed of this year’s award. Jackson believes the Top 75 NBA players should vote instead of the “keyboard warriors” *ahem* excuse me, the writers association. Next, A Farzy Show rewind to Kurt Helin discussing why he chose Joker over Embiid arises on the show. Helin says he lost sleep over trying to decide the right move based on all the numbers and head-to-head matchups.

Farzy disagrees with this take, but he does point out that if your team does not have a chance to win a championship, how valuable of a player are you? Numbers versus the best or most valuable player line up, but do they? Let’s not talk about the MVP anymore. If Embiid can stack up the playoff and championship accolades, it will not matter if he becomes the first Sixer to lead them to the Conference Finals since Allen Iverson.

Then, on the Rothman Orthopedic Guest Line, Paul Hudrick of The Liberty Ballers joins Farzy on the show. Paul is a man of many faces and recently got a Bradley Cooper “A Star is Born” comparison added to his repertoire. Paul and Marc discuss the MVP race. Hudrick believes that with all of Embiid’s accomplishments this year should have won him it over Jokic. Farzy and Paul get into the Game 5 preview discussing the Sixers’ play thus far and what is yet to come. The man of many faces believes that Joel Embiid has changed the tide of this series. He believes that the team that scores better on the road first will win the series. The Sixers have the edge going into Game 5, and Hudrick thinks the Sixers will close out the series by Game 6.

Next, The Steak and Main sponsors the chat check on Social Media, answering all the fans’ comments and concerns about Philly sports. The main topic, of course, is how the MVP voting should happen. Marc believes the players and the coaches should vote over the writers. How do you argue against it? It just seems that “The Process” will always be punished and condemned by the writers, and Joel Embiid will suffer because of that.

Finally, on the Morning Rush, brought to you by Sky Motor Cars, the Phillies bashed the Seattle Mariners in the first game of the three-game series behind six scoreless innings by Ranger Suarez. Hoskins and Segura went yard, and the Phillies won 9-0 to improve their record to 13-16. Aaron Nola is on the mound for the Phils against Robbie Ray. The Sixers are in Miami for Game 5 against the Heat tonight at 7:30 pm.

Ray Didinger retires after 53 years. Enjoy your family and your retirement from all of us at The Farzy Show. Well Deserved!