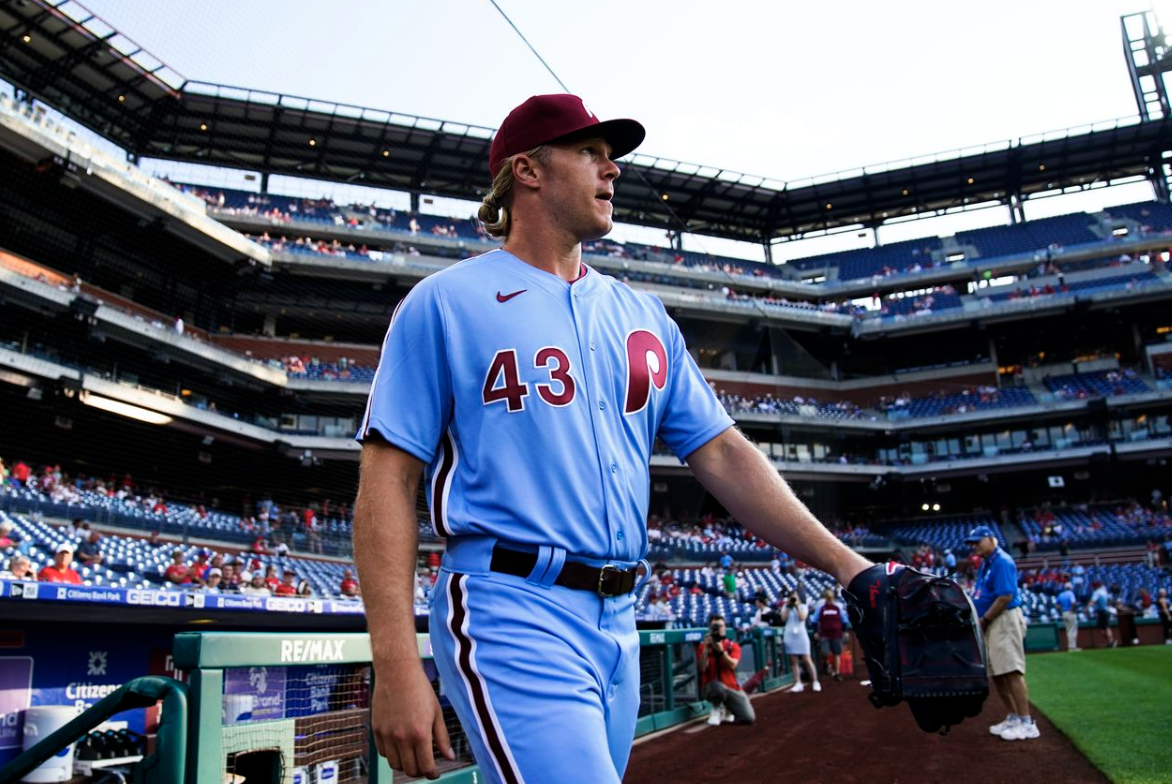 TGIF Sports Fans! The Farzy Show with Marc Farzetta is back again, talking about all things Philadelphia in the sports world. Today the show welcomes back former Philadelphia Eagle Hollis “Tank” Thomas to discuss Eagles Training Camp. Speaking of football, it started yesterday with the HOF game. The Las Vegas Raiders steamrolled the Jacksonville Jaguars 27-11. On the other hand, Noah “Thor” Syndergaard made his debut for the Phillies in the rain-delayed outing, resulting in a 5-4 win.

First off, Marc discusses last night’s Phillies game. There was excitement for Thor’s debut in powder blues! Thor gave Farzy hope because his pitching repertoire showed up front and center. He kept hitters off balance throwing to the outside, and gave up a season-high 11 hits. Offensively, the Phillies scored behind a solo homer and RBI double by Hoskins, followed by a three-run shot by Alec Bohm. Also, before the rain delay, Nick Castellanos made a stellar throw from rightfield to catch the runner going home, which kept the 5-4 lead.

Next, he admits he was not crisp with his pitches, but getting used to a new uniform, stadium, and team was an adjustment. Noah Syndergaard Line: 5 IP, 4 R, 4 ER, 2 SO, 0 BB, on 79 pitches. Additionally, the Phils DFA’d Didi Gregorius surprised Marc and many people. It was the right baseball move, but it was pretty surprising. Marc gushes over Bryce Harper in the booth with Tom McCarthy and John Kruk. According to Farzy, Harper was a captivating talking head.

Phillies Sidenote: Mickey Moniak is now an LA Angel and is given a shot to start every day. He commented on his time in Philadelphia and thanked them but never felt he got the chance to go out and start like Bryson Stott. Marc agrees he is not wrong; he was not given that type of chance, especially being a #1 Overall pick. However, every chance he got, he had the opportunity to take advantage of it.

Moreover, on the Rothman Orthopedics Guest Line, Hollis “Tank” Thomas discusses Eagles Training Camp. Tank and Farzy dive into TC and how the new CBA has made preseason more player friendly. It has its benefits, but soft tissue injuries have become more prevalent. Hollis highlights AJ Brown as the player he has gravitated towards and calls him a “giant amongst men.” Also, Thomas mentions Jordan Davis and Boston Scott showing their speed in practice walk-throughs and reps. The pair also discusses Jason Kelce’s tutelage of Jordan Davis will make a massive difference in his development this season. Hollis is not sold on DC Jonathan Gannon because he does not stick to a dynamic version of football. The Eagles lost to the Bucs in the WC round last year.

Furthermore, Thomas and Farzetta bond over actor Christopher McDonald’s (Shooter McGavin) celebrity ghost story he told on a radio show they were on. Thomas wants to see Gannon put the players in the correct positions and make sacks. Hollis saw Hurts at practice and attests that he has significantly matured and will lead the Eagles to victory. Hurts has everything so that he can cook this season, and if he cannot do it, move on to the net one. #PhillyQBFactory On another note, Hollis invites Marc to the Commanders vs. Eagles Game in DC on September 25th.

Then, BlueChew sponsors the chat check on Social Media, answering all the fans’ comments and concerns about Philly sports. The fans love Hollis Thomas and disco vibes on today’s interview. The lightning strike while Thor pitched was iconic. People have mixed views on Syndergaard’s debut. Then, people discuss the ghost story Farzy told about actor Christopher McDonald and his own house.

Finally, on the Morning Rush by Sky Motor Cars, the Phillies are back at it again in South Philly against the Washington Nationals. Kyle Gibson makes his return since being on the bereavement list for the Phils. Josiah Gray will get the ball for the Nats tonight at 7:05 PM.