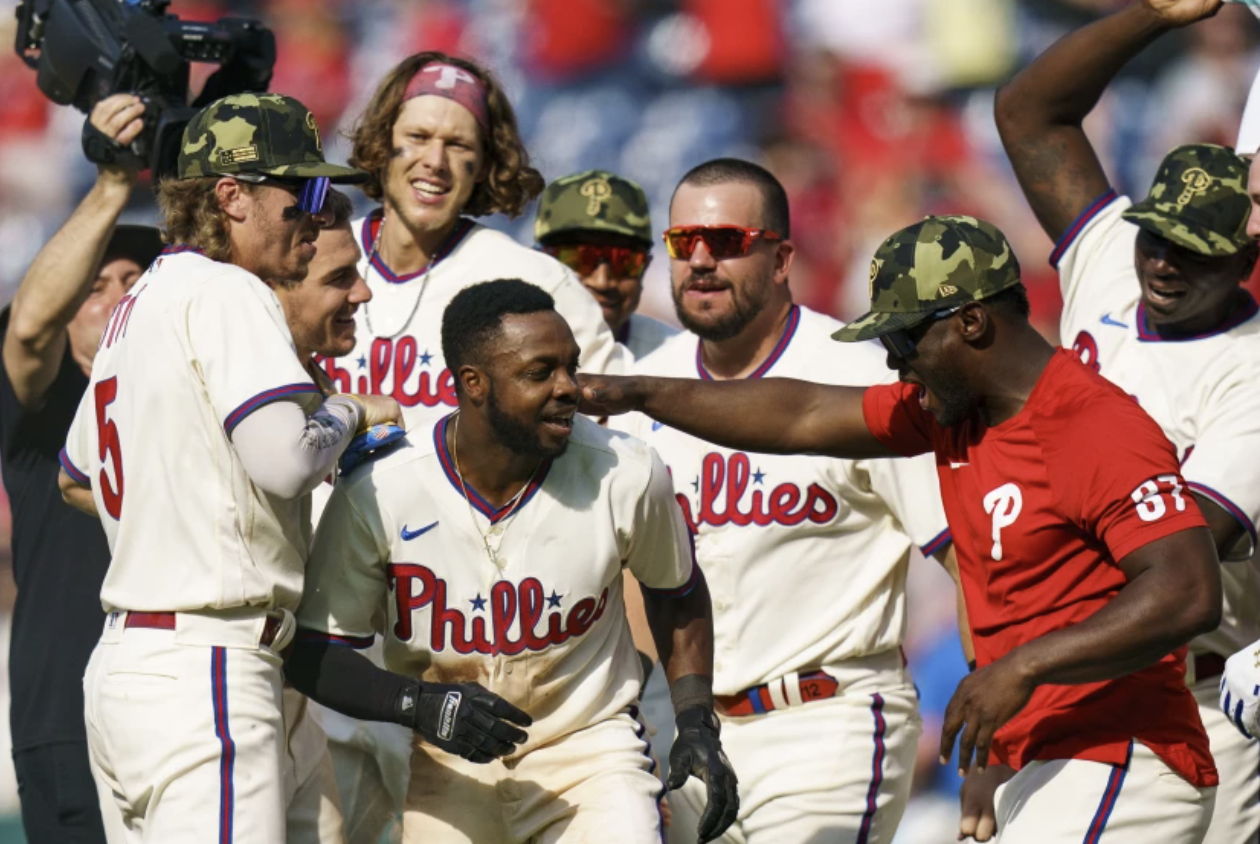 Welcome back to another Monday and week of Philly Sports Content on The Farzy Show with Marc Farzetta. The Phillies get a bizarre win against the Dodgers in the weekend finale. Some Tyrese Maxey rumors are floating around the NBA, possibly a part of a Bradley Beal deal?

To start, Marc gets into the Phillies’ crazy win over the Los Angeles Dodgers in the bottom of the 10th inning. Alec Bohm put the ball in play for Max Muncy to bobble the ball and allow two speedsters in, Garrett Stubbs and Roman Quinn, to score from third and second, respectively. The Phightins fought back and snagged the win 4-3, similar to what happened the previous weekend to the Phillies in LA. Marc still believes the Phils are on the cusp of going on a dominant run. The Phillies are a great ballclub that can make the playoffs. Above all, most people are eyeing the wild card, but the division could happen.

Next, Farzy gets into some NBA trade rumors regarding young phenom Tyrese Maxey. Bradley Beal and Zach LaVine are a couple of names the Sixers will most likely be connected to this offseason. The question is, are either of these two worth giving up Tyrese Maxey? Daryl Morey will be vigilant this off-season. In conclusion, if the Sixers can add Beal or LaVine by packaging Tobias Harris or Matisse Thybulle and picks, then the starting five will be set.

Furthermore, Morey needs to get creative and fix the bench. If he can do all of that, the Sixers will be a force to be reckoned with next season. Marc believes Daryl Morey must prove he is as good as people make him out. Overall, the James Harden trade has not worked out. Thus, the Sixers have not progressed further than the playoffs’ second round. So, Farzy believes he needs to earn his stripes and prove it to Philadelphia.

Then, on the Rothman Orthopedic Postgame Report, Farzetta gets into the Phillies’ bizarre win against the Los Angeles Dodgers. Zach Eflin pitched spectacularly: 7 IP, 4 H, 2 ER, 2 BB, 12 SO, and finished with a 3.65 ERA. Marc plays Girardi’s postgame interview, where he discusses the elite baserunning of Roman Quinn and clutch play by Garrett Stubbs. Stubbs hit his first MLB home run and laid down a pristine bunt to start the rally win over the Dodgers. Rhys Hoskins went 0-4, slid into first base, and slammed a trashcan in the dugout. However, this is a rare occasion where Marc wants to see emotion, mainly because of how much the Phillies are underperforming. Lastly, Girardi believes in this team, and they are fighting to get the runs and the wins, but you cannot dismiss the competition’s efforts.

The Farzy Show announces a new sponsor! Versusgame is an app where you can answer Marc’s top Philly sports questions. This week’s question is: Who will be higher in the standings, the Marlins or the Phillies? Download the app, search Farzy Show, and you can earn some cash! All answers have to be in by May 30th at 11:59 pm.

Finally, The Steak and Main sponsors the chat check on Social Media, answering all the fans’ comments and concerns about Philly sports. Marc reflects on his golf outing and how he did not get burnt like a lobster. The audience makes fun of the Phillies coaching staff by comparing them to Doc Rivers. The Phillies’ offense is anemic and upsets this city. Hopefully, Morey can be the guy for the Sixers, and the Phillies can go on a run for Philadelphia.

On the Morning Rush, brought to you by Sky Motor Cars, the Eagles Autism Challenge raised a lot of money over the weekend, with the players taking many photos and signing autographs. The Phillies start a four-game set at 7:20 pm in Atlanta with Zack Wheeler on the mound against Tucker Davidson. Go Phils!