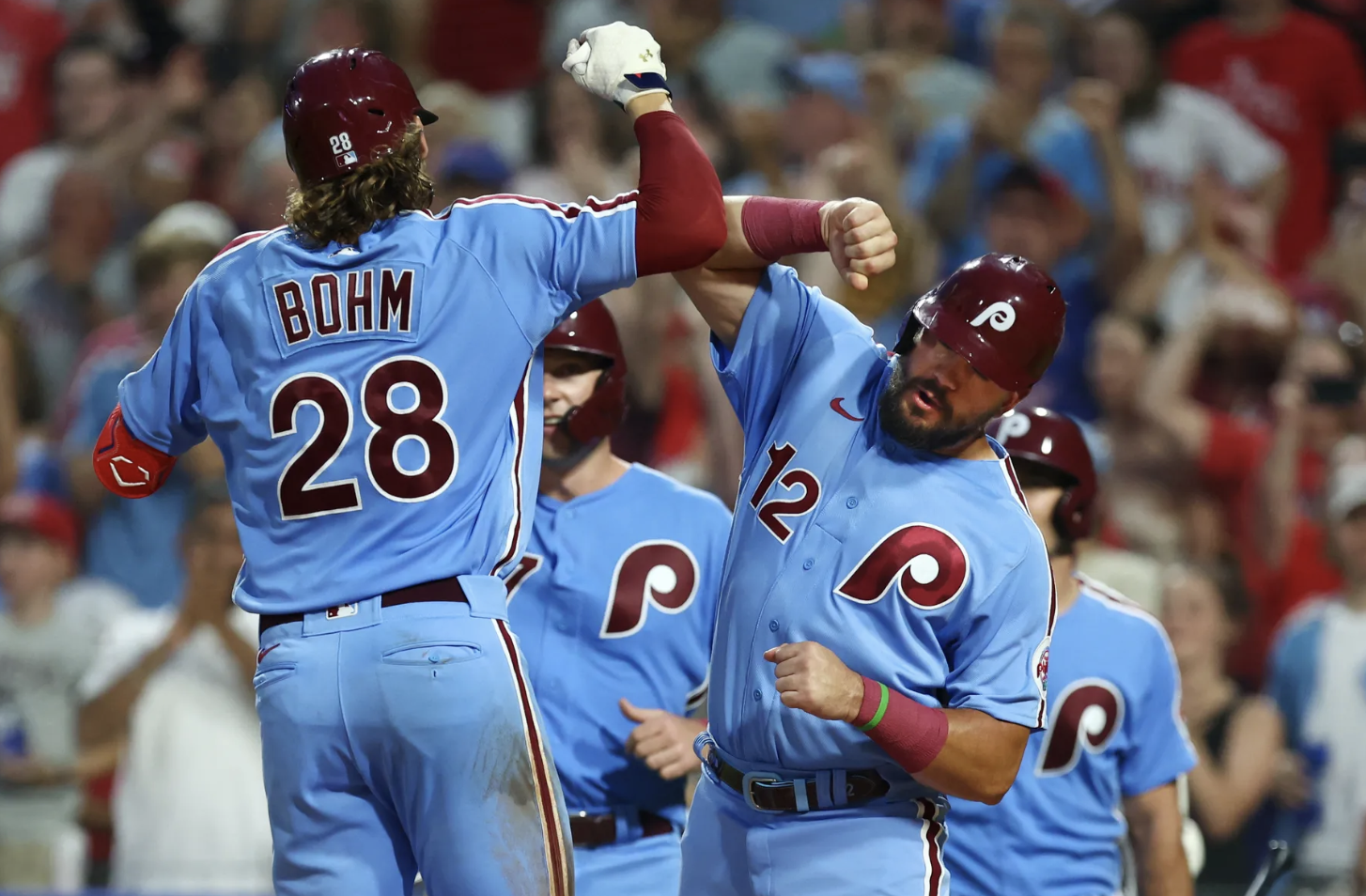 It is a Muggy Monday at The Farzy Show with Marc Farzetta. The weather reached the triple digits today! On today’s show Kevin Kinkead, a writer in Philly Sports for over a decade, gives his thoughts on the Phillies’ playoff pursuit. The Phillies sweep the Nationals at home and set a franchise record in home runs hit in a single series.

First and foremost, Farzy dives head first into the Phillies’ incredible hot streak. He is happy the Phils are beating the teams they need to destroy, especially the 4-AAAA Nationals. Marc highlights JT Realmuto becoming the first catcher in the modern era to homer and triple in back-to-back games. The last catcher to do so was Realmuto in 2019. Also, Rhys Hoskins hit a home run in four consecutive games.

Additionally, Darick Hall and Nick Maton both hit bombs for the Phils. This baseball team is blowing away opponents and pleasantly shocking the baseball world. The “realistic” phan waited for the Phils to play down to their opponent, but it did not happen. Farzy loved the bunt by Schwarber when the Nats had the shift on him to get a single. The smart baseball tactics make all of Philadelphia smile with glee as the Phils keep the peddle down.

Furthermore, Marc discusses the elephant in the room and Pete Rose’s return to Philadelphia. Rose was a vital member of the 1980 Phillies WS Championship team. He went on to manage the Reds and received a ban from MLB for gambling. In 2004, Rose wrote a book admitting to gambling after having denied it for years. He was not morally sound, but there is no denying his talent as MLB’s hits leader. Marc discusses the Dowd Report and the 2017 reveal of Pete Rose’s sexual relations with under-aged girls (and Tax evasion). Also, in 2017, the Phillies planned to elect Rose to their Wall of Fame but canceled it. Now, five years later, he is invited back.

Moreover, It is horrendous that Pete Rose received a standing ovation. Farzy is finished with the despicable behavior of Pete Rose and does not care. One would think that with this public appearance, he would take advantage of clarifying the situation or at least apologize. Yet, no. Rose was made available to the media, and The Philadelphia Inquirer’s Alex Coffey asked about the situation. Regarding his presence at the event, Rose responded, “It was 55 years ago, babe.” Apparently, he insincerely apologized after the game to Coffey. Ultimately, Marc does not believe Rose should be in the HOF or baseball.

Next, Eagles players, such as AJ Brown and Zach Pascal, were hyped up to see over 30K fans show up for just a practice! Also, it was Jalen Hurts’ 24th Birthday; Happy Birthday, Jalen! Farzetta shows great tweets and videos from the practice. HC Nick Sirianni believes Lane Johnson is the best right tackle in the entire world. Then, Marc discusses the Eagles’ practices and how the Eagles will start preseason on Friday.

Then, on the Rothman Orthopedics Guest Line, Kevin Kinkead of Crossing Broad talks about the Phillies. Kinkead reminisces about the Phillies teams from a decade ago. He mentions he is a Philadelphia Union guy, and this has been the best sport summer Philly has had in a while. Farzetta and Kinkead agree that the all-time hit leader should be in the HOF, not Pete Rose. He is a creepy guy who gives off unsettling vibes. The Rose situation could have prevented many sideshow acts he put on during the 1980 celebrations.

On the other hand, the pair of talking heads discuss today’s Phillies team. Kevin and Marc discuss the trade deadline and the red hot Phillies. Then, they talk about the Sixers and the KD situation. Kinkead thinks the investigation into the Sixers’ tampering is not justified. Furthermore, they discuss the Eagles’ passing and running game. Kevin ponders if Jalen Hurts will be a passer or more of a Lamar Jackson type.

BlueChew sponsors the chat check on Social Media, answering all the fans’ comments and concerns about Philly sports. The fans love that JT is on his way back to BCIB form. Everyone loves what they see from the Eagles. People are not happy with Rose being in the booth. Farzy makes his hilarious impressions.

Finally, on the Morning Rush by Sky Motor Cars, the Phillies start a three-game series with the Miami Marlins. The Phillies are 60-48 in the 2nd WC spot looking to knock off the Braves. All Phillies Alumni say the same thing, “Phillies Phans elevate our play.”

Link to the Episode