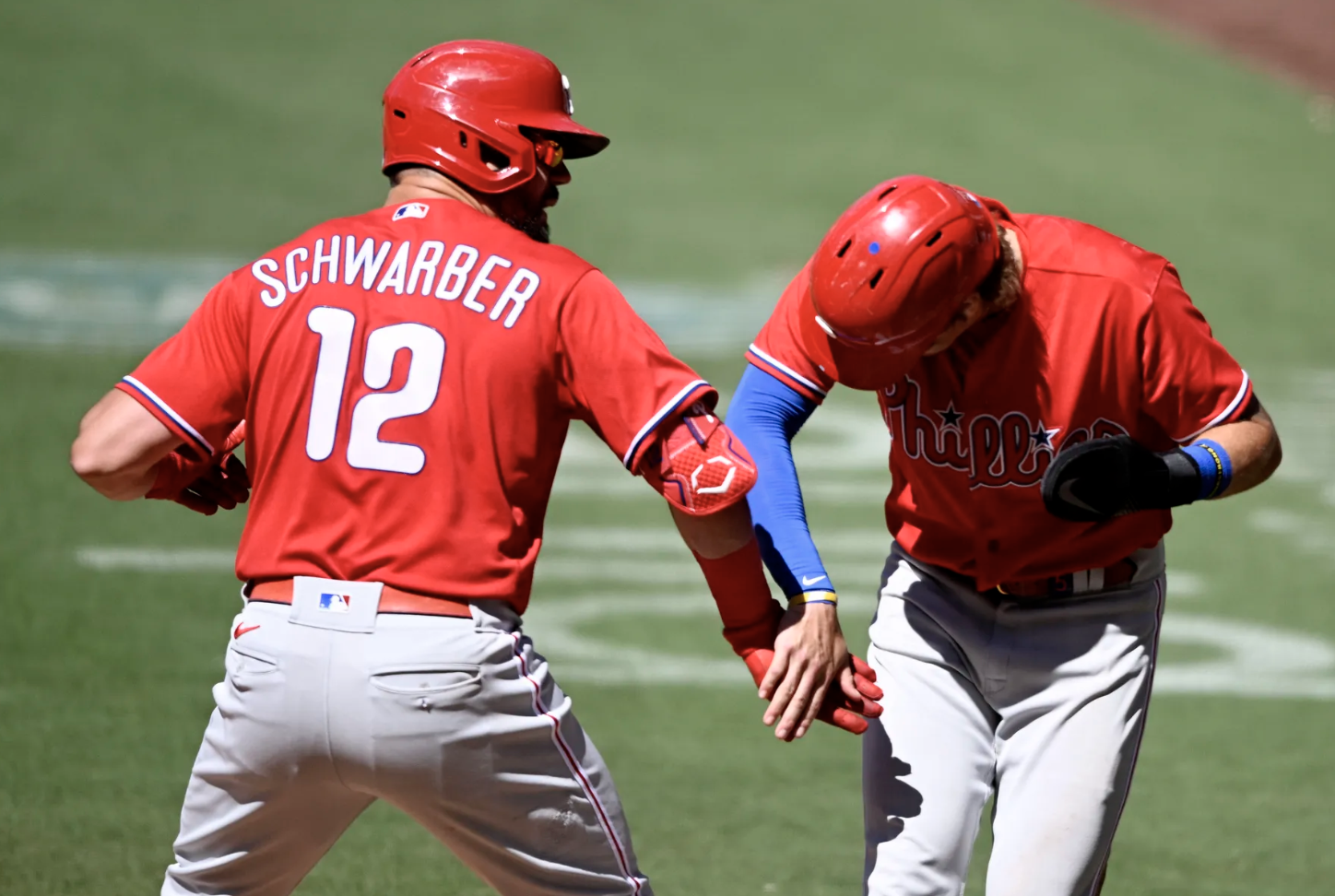 Happy Monday, Sports Phans! Welcome back to The Farzy Show with Marc Farzetta, presented by Destination Retirement, featuring PhillyVoice.com’s Evan Macy. The Phillies win 3 out of 4 games against the San Diego Padres. However, they lost Bryce Harper to an HBP fracture that will keep him out of the lineup for weeks, if not months. Harper will get evaluated by a doctor today in Philadelphia. The ETA for Harper’s return is in August/September. Hopefully, the Phils can make do without the reigning NL MVP for the foreseeable future.

First and foremost, Farzy highlights Nick Castellanos’ 4-hit performance in the Friar Finale in San Diego. Now that Harper is out, Castellanos must step up in a big way to balance the Phillies’ power output. J.T. Realmuto had a hell of a west coast series, hitting a couple of homers. The young guys (Vierling, Bohm, Stott, and Moniak) will be stepping up for the Phils in the coming weeks. If Atlanta can lose Ronald Acuna Jr. to a season-ending injury and go on to win the World Series, then the Phillies have a chance.

Thus, losing Harper for 4-6 weeks and keeping themselves in the playoff run should not be too much to ask. Castellanos must be the guy to rise to the occasion and earn that paycheck. Earn the phrase, “You’re the guy we went over the luxury tax for,” and Nicky C is that guy. The Phillies bullpen has been electric over the recent stretch. They shut down hitters for 34 straight innings. The Phillies won the series against the Padres due to the electric pitching by the bullpen.

Next, Marc Farzetta discusses the massive brawl between the Seattle Mariners and the Los Angeles Angels. Obviously, there is baseball code/tradition, but what happened in Anaheim was pure entertainment. Jesse Winker flipped off fans and fought with an injured Anthony Rendon. The brawl ensued, and no one had any regard. Winker did apologize to the fans but regretted nothing else. In fact, a Mariners fan sent him a pizza to Angels Stadium to cheer him up.

Then, on the Rothman Orthopedics Guest Line, the PhillyVoice.com’s Phillies correspondent Evan Macy joins the show. Marc and Evan talk about Bryce Harper and the possible September return from the fractured thumb. Initially, Macy put out a pessimistic tweet about the Phillies season but believes the team can make a run behind certain players performing 10% better. The upcoming homestand against Atlanta, St. Louis, and Washington is crucial for the Phils to stay above water. Farzy mentions that Castellanos is hot in September and Schwarber is hot in June. Maybe if the Phils are still in the hunt by the Fall, then Castellanos will make a real impact upon the return of Harper.

Furthermore, Evan proposes many different lineups, and fielding opportunities are open to players, unfortunately, because Harper is not in the lineup. Mickey Moniak is making his return. Moniak will likely have another chance to show he is capable of starting. If not, the Phils might package him for a reliever at the deadline. Evan Macy recalls an email from Mr. Moniak saying he would eat his words about calling him a ‘bust.’ Here’s hoping Moniak gets a chance to compete for the CF spot against error-prone Odubel Herrera and the inconsistency of Matt Vierling.

Finally, the Steak & Main sponsors the chat check on Social Media, answering all the fans’ comments and concerns about Philly sports. The chat erupts with support for Bryce Harper and the Phillies’ ability to survive without him. Although many Phils players are underperforming, the hope is that the Padres series ignites the slumping players. The chat sends their takes on the Phillies’ needs to win. Now that the Phillies won the Padres series, they need to prove it wasn’t a fluke.

On the Morning Rush, brought to you by Sky Motor Cars, the Phillies are off today but return tomorrow for their homestand against Atlanta. Zack Wheeler will get the start against former Phillie Charlie Morton at 7:05 PM tomorrow. The Colorado Avalanche close the door on the Tampa Bay Lightning to hoist the Stanley Cup. The Avalanche won their Third Stanley Cup with a 4-2 series win, preventing the Bolts from acquiring their fourth cup in 20 years.