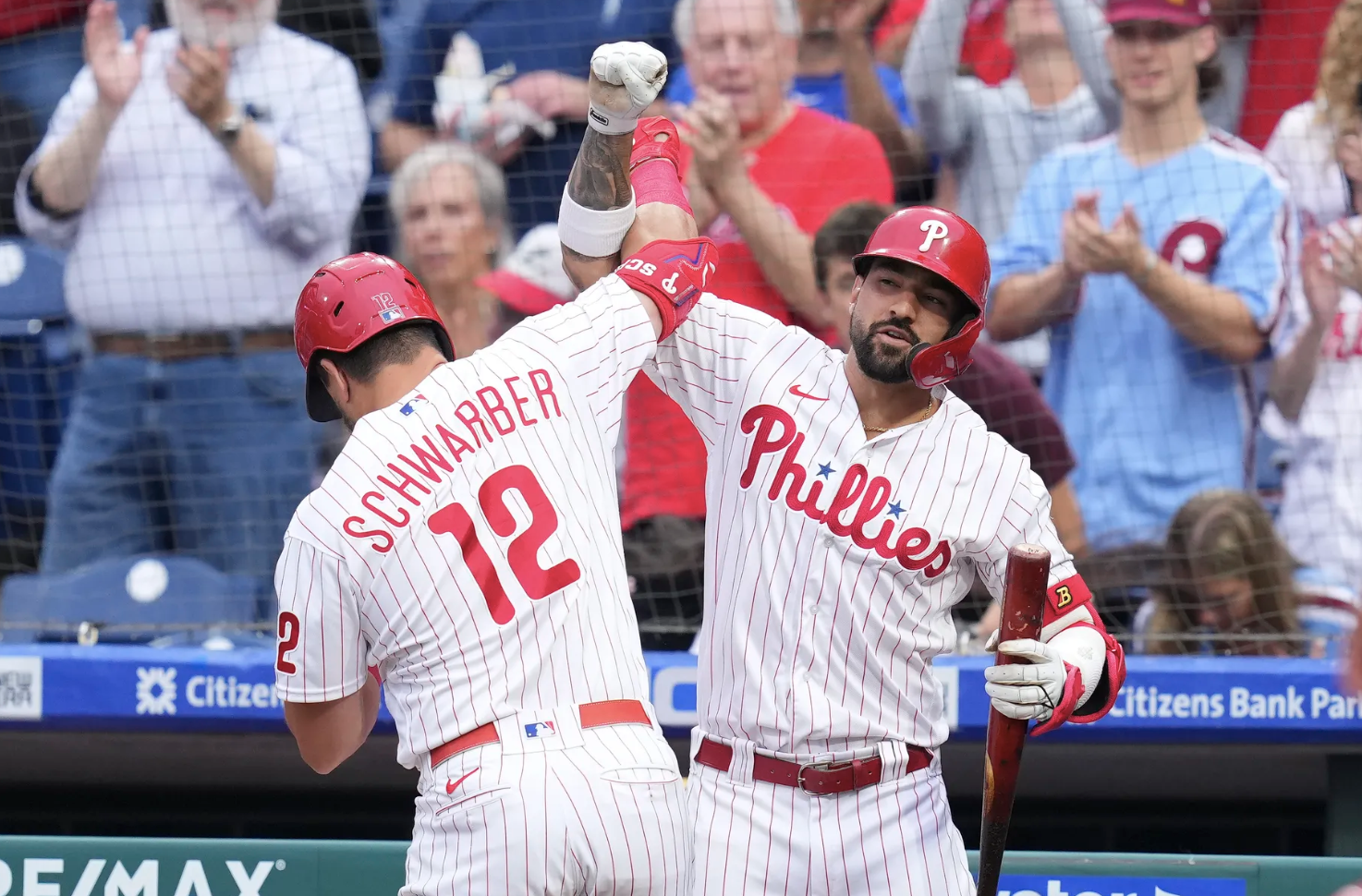 It’s Humpday, Everybody! This is The Farzy Show with Marc Farzetta, featuring The Painted Lines and the USA Today NBA writer Austin Krell. The Phils snag the 3rd WC spot, thanks to the Cardinals losing to Atlanta and the Phillies winning. They are 5-3 without Bryce Harper. James Harden and the Sixers meet to negotiate a new contract.

At the top, the Phillies beat Nationals 11-0 in Game 1 of this three-game set. The ever-fluctuating pitcher Christopher Sanchez went 5 IP, 2 H, 2 BB, and 2 SO without giving up a run. Clearly, Kyle Schwarber and Rhys Hoskins are on fire at the plate. Last night, every Phillies player stepped up to contribute to the offensive onslaught committed against the Washington Nationals. Since the Harper injury, it is clear that the Phillies are ready and able to make up for the loss of the NL MVP. Overall, Bryce Harper believes he will be back to compete with the Phillies.

Next, Marc discusses the Sixers Summer League game that happened simultaneously as the Phils game last night. The summer league is all about Jaden Springer. Clearly, Springer needs to keep working on not turning the ball over if he wants to make the Sixers roster. The Sixers lost to the Memphis Grizzlies. However, there were great performances by Isaiah Joe, Charlie Brown, and Paul Reed. There is some worry around the James Harden contract. Will Harden sign a one-year deal and negotiate next year, or will a full three-year extension occur?

Then, on the Rothman Orthopedics Guest Line, Sixers writer of the Painted Lines and USA Today, Austin Krell, talking about the Sixers summer league and offseason. Krell and Farzetta discuss Jaden Springer’s development from last year to this year. Undoubtedly, Springer’s jump shot improved, but he needs to get stronger with the ball in his hand. On the other hand, Jaden Springer was the best defensive player. Even so, Springer is not NBA-ready. Regarding the Sixers shifting players, trading Tobias Harris by the deadline or Matisse Thybulle before the season are likely moves.

Furthermore, Austin thinks that Harden might sign a one-year deal with a player option to prove he is still an elite player to warrant a more significant extension. Also, Harden has gotten to the gym earlier to re-condition himself, but workout videos in Philly do not mean much (i.e. Ben Simmons). Krell believes that the Sixers and PJ Tucker relationship is a match made in heaven.

Additionally, speaking of Simmons, Farzy and Krell break down the nightmare situation in Brooklyn. Before KD and Uncle Drew are moved, Simmons would have to go with one of them or alone somewhere else because of rookie deals in the CBA. Krell thinks Utah is a likely destination for one of the trio, and Donovan Mitchell could be on his way to the Big Apple.

Finally, Steak & Main sponsors the chat check on Social Media, answering all the fans’ comments and concerns about Philly sports. The fans celebrate the Phillies acquiring the Wild Card spot after a tumultuous first half. The fans highlight how valuable Matt Vierling has been for the Phils. If the Phillies stay in the race for the WC and get Jean Segura and Bryce Harper back, then they will be able to push through to October baseball.

Last but not least, on the Morning Rush, brought to you by Sky Motor Cars, Aaron Nola will face off against Josiah Gray at 7:05 PM. Now that the Phils snagged the WC spot let’s see if they can hold on to it. Hopefully, the Phils can keep their bats alive against Gray this evening.