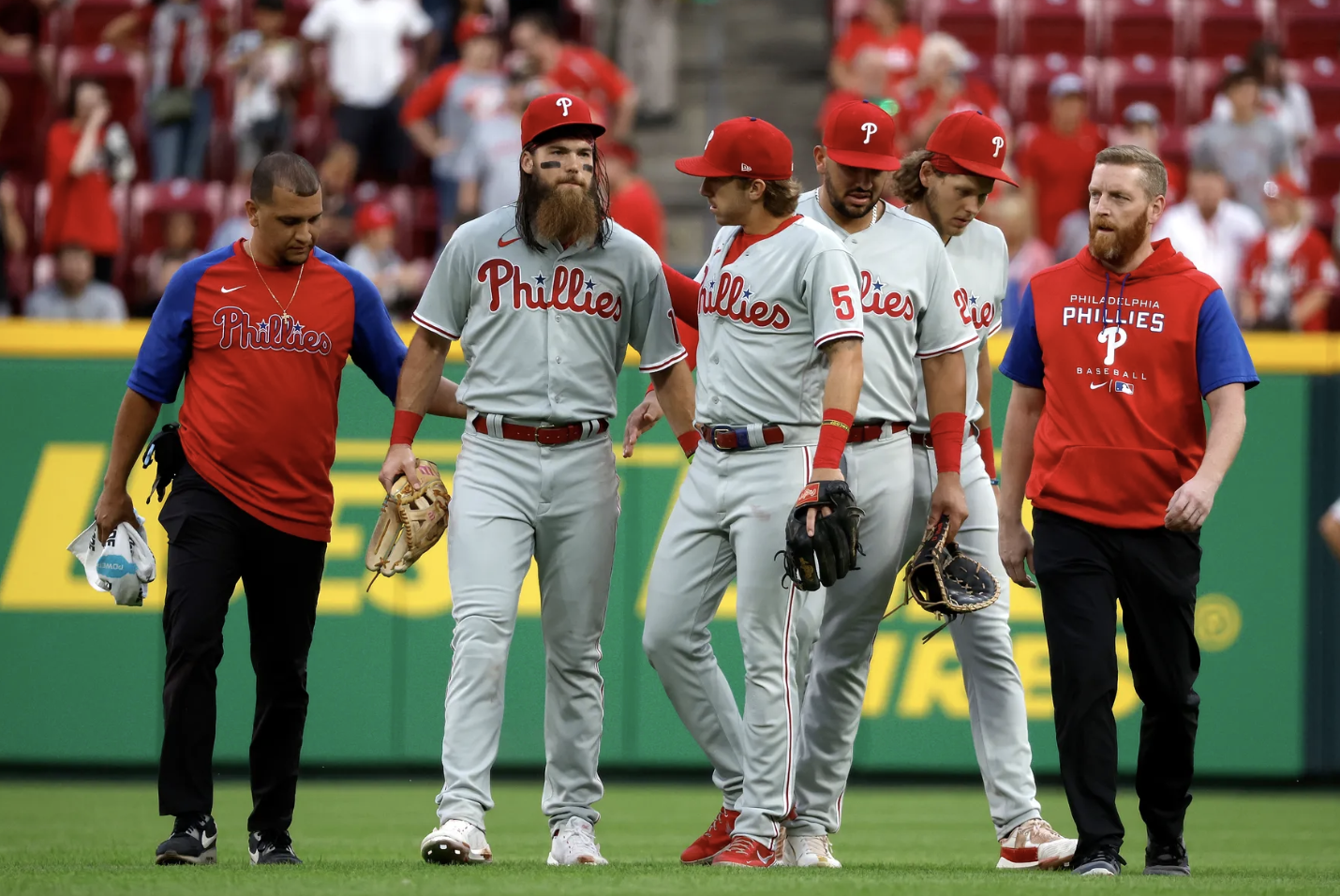 It is Hump Day, Sports Phans! The Farzy Show with Marc Farzetta presents returning guest Paul Hudrick from Liberty Ballers to talk all things Philadelphia 76ers. In last night’s game, the Phillies had an offensive onslaught against the Reds, winning 11-4. However, the Phillies lost Brandon Marsh after he took a bad fall in the outfield. The Philadelphia Eagles’ energy is high regarding Jalen Hurts and the Birds’ starters. The Kevin Durant saga continues. Will KD be Sixer come to the start of the season?

First and foremost, Marc talks about the Phillies’ surging offense against the Reds. Nick Castellanos’ return to the Queen City has injected some XBH power to his bat going ⅗ in the ballgame. More importantly, DH Rhys Hoskins went 3/6 with two homers. Kyle Gibson tied his career high in 11 SO in a game against Cincinnati. Unfortunately, Brandon Marsh exited the game early after trying to rob an HR ball that led to a bad landing. Overall, the Philadelphia Phillies franchise acquired their 10,000th win.

Also, Farzy dissects the Jimmy Rollins comments about the empty seats at CBP. Farzy exudes compassion and understanding regarding the prices of tickets, food, and drinks. He shares a heartwarming love for the Phillies despite achieving 10,000 losses faster than wins.

Next, Farzetta talks about the Eagles and training camp. He discusses some of the press surrounding Jalen Hurts and his MO with all the new weapons. According to Hurts, he is not phased at all by all the weapons around him. He will do anything and everything he can to give it to the open guy. Zach Pascal addressed the media about the accuracy of Jalen Hurts. Pascal said Hurts has been accurate and amazing. Then, Shane Steichen highlights Hurts’ superpower of being able to run the ball when no one is open.

Then, on the Rothman Orthopedics Guest Line, Paul Hudrick from Liberty Ballers returns to discuss the Sixers. Right off the backboard, Farzy asks about KD. There is no word that KD only wants to go to Philly. Currently, Toronto and Boston are the front-runners with the package they could offer. From the Nets’ perspective, it does not make sense. Hudrick and Farzetta conclude that KD to Philly is unlikely but not impossible.

Furthermore, Mr. Paul believes that the Sixers should monitor the Utah Jazz situation. If Donovan Mitchell goes, then Morey should try to get Clarkson or Beverley. Paul thinks the Sixers are comfortable with what they have on the roster. If an opportunity presents itself, rest assured Daryl Morey will be on the phone. The pair of talking heads discuss the believability of James Harden’s health this offseason.

Moreover, BlueChew sponsors the chat check on Social Media, answering all the fans’ comments and concerns about Philly sports. The fans say good morning and hype themselves up for a Red October with the Phils. Then, they discuss Nick Maton taking over for Brandon Marsh after his injury.

Finally, on the Morning Rush by Sky Motor Cars, the Phillies are back at 12:35 today against the Reds for a finale with Ranger Suarez on the bump. The Reds submit rookie Nick Lodolo to the task of facing off against the surging Phils. Hopefully, the Phils can get the sweep against the Reds. The Eagles will start practice in Cleveland on Sunday before the preseason game.