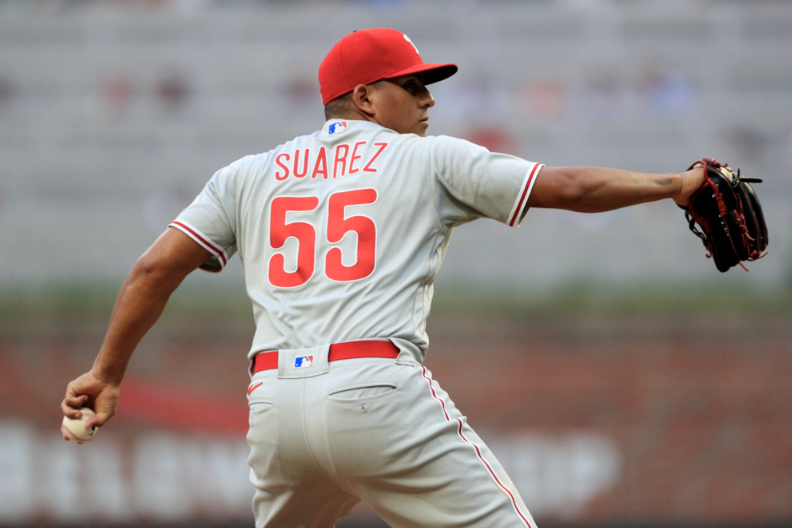 Happy Friday, Philadelphia Sports Fans! Welcome to The Farzy Show with Marc Farzetta, presented by Destination Retirement and streamed live from Steven Singer Studios. The Sixers trade the 23rd Overall Pick and Danny Green to the Memphis Grizzlies for De’Anthony Melton. The Phillies win game one over the San Diego Padres, 6-2. The Phils pounced on NL Cy Young leader Joe Musgrove and slapped him with 6 ER. The Brooklyn Nets might be blowing up the team.

At the top, Farzy highlights the Phils stomping on Joe Musgrove and the Padres in San Diego. Both Schwarber and Realmuto hit bombs off the Cy Young favorite, who had not given up more than 2 ER in his last 12 starts. Ranger Suarez pitched into the eighth inning, only giving up 2 ER. Marc is betting against Nick Castellanos that he will go an entire month without hitting a homer. There are six games left in June, and fans can vote on the Versus Game app under The Farzy Show for a chance to win. Interestingly, Musgrove had a no-hitter going into the fifth inning before the Phillies tattooed him for his first season loss.

Next, Marc discusses the Woj-bomb that ignited sports fandom before the NBA Draft yesterday. The tweet provided a shortlist of teams Kyrie Irving would want to be signed and traded to if the Nets and he cannot agree to a deal. One of those teams is none other than the Philadelphia 76ers. However, Farzy is hoping Irving will go somewhere else and possibly Kevin Durant to want out. This could lead to him perhaps coming to the Sixers? In the end, Ben Simmons could show up to camp and realize that Kyrie and KD are gone, which would be the best karma after the past year.

Then, on the Rothman Orthopedics Lockerroom Report, Farzetta plays clips of Daryl Morey regarding the Sixers’ trade for De’Anthony Melton. Morey was not able to fully comment because the trade was not official. Melton fits the need for a perimeter defender off the bench and can run the second unit. It is unlikely that KD or Kyrie will be a Sixer next season. Marc believes it would be great if KD came to Philly, but budgetary constraints will affect any deal of this kind.

Furthermore, Marc gets into some more Phillies talk on the Postgame Report. In the fifth inning, Didi Gregorius breaks up the no-hitter with a single and later scores when Odubel Herrera singled up the middle. Rob Thomson highlights the excellent pitching performance by Ranger Suarez. Thomson mentions that “that’s baseball” regarding Castellanos’ hit that broke out of his drought. Hopefully, the Phils can continue beating the Friars in San Diego tonight at 9:40 PM.

Finally, the Steak & Main sponsors the chat check on Social Media, answering all the fans’ comments and concerns about Philly sports. The audience does not want Kyrie in Philly because of his unreliability. Marc entertains the possibility of Simmons being alone in Brooklyn. The fans and Farzy feel that the Sixers Trade overshadowed the Phillies’ win. The audience ponders whether or not KD would like to be on the same team with James Harden again? Is Tyrese Maxey untouchable? More on the Sixers come Monday!

On the Morning Rush, brought to you by Sky Motor Cars, the Phillies and Padres are back at it again, with Aaron Nola getting the ball against ROY leader MacKenzie Gore. Nola has only allowed two runs in his last three starts. Go Phils!