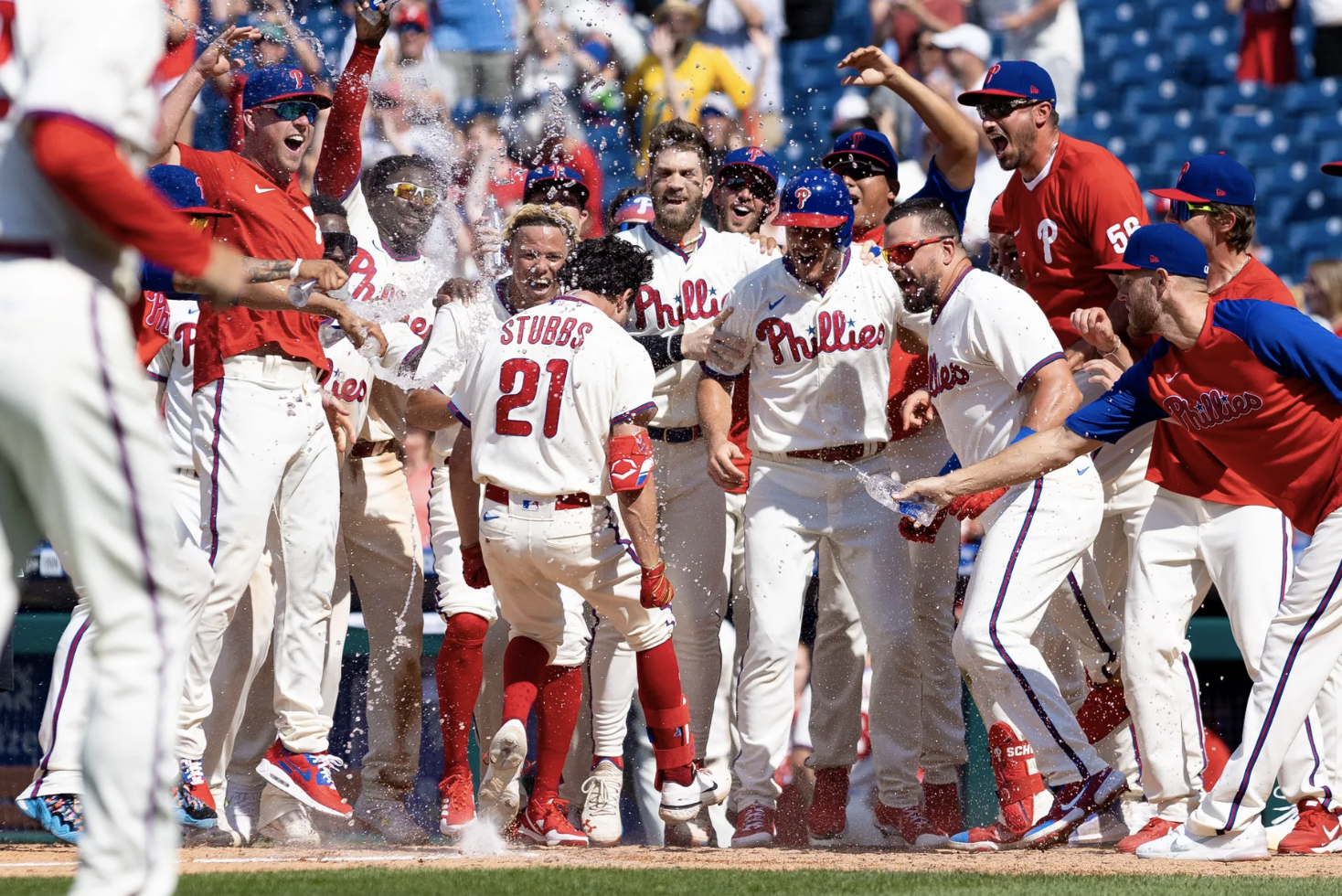 Welcome to Thursdays on The Farzy Show with Marc Farzetta, joined today by Riley Cote and Derek Settlemyre, the hosts of the Nasty Knuckles Podcast. There is one name Philly sports fans should be cheering: Garrett Stubbs! Phillies backup catcher launched his first career walk-off home run in the bottom of the ninth of yesterday’s game. Stubbs walks off against the Marlins, which the Phillies desperately needed. He knew the three-run shot was gone right off the bat, giving the Phils the 3-1 victory.

At the top, Marc discusses the heroics of the Phillies series win against the Fish. Garrett Stubb’s 9th inning heroics were a godsend to this team trailing 1-0 with two outs and two men on, but Kyle Gibson was masterful. Gibson pitched to the first batter of the ninth, but his line features 8.0 IP, 7 H, 1 R, 1 ER, 0 BB, and 6 SO. The veteran-righty did precisely what he needed to do. Unfortunately, Miguel Rojas got a short porch homer to the foul pole to put the Fish ahead. Farzy does not want to see Rojas for a while since he always kills the Phillies.

Furthermore, Farzetta tells the kids to listen to Frank Sinatra and hit walk-off home runs. Miguel Rojas made a mid-air tag of Alec Bohm sliding into second, and Marc wishes Bohm was shorter in this one instance. Later, Alec Bohm makes an incredible sliding play in foul territory, then follows with a single for the tying run. Marc felt this game was like a playoff win because of how much the Phils struggled against Miami. The win sealed the series for the Phightins, who now head to our nation’s capital for a five-game set against the cellar-dweller Nationals.

Next, Farzy discusses a little Flyers and Sixers news. To fill the Flyers HC vacancy, John Tortorella received the offer. His fiery attitude and passion for hockey will kick this team in gear. The NBA Draft is next week, and there are reports that Danny Green, the 23 Overall Pick, Tobias Harris, and Matisse Thybulle are on the trade block. Marc is not 100% out on Thybulle, but if there is some way to use these chips to acquire compounding talent for the Sixers, then by all means. Darryl Morey needs to make a big move this off-season and be the great GM he is supposed to be.

Then, on the Rothman Orthopedic Guest Line, Riley Cote and Derek Settlemyre of Nasty Knuckles Podcast talk all things Flyers and NHL. Farzy breaks out the hockey gloves for this interview with the Nasty Knuckles fellas! Hiring a new HC with a third party is unusual, but Riley is all about the hiring of Torts. Derek also likes the hiring, but maybe even hiring Rick Tocchet would be awesome. The NK guys agree that Torts is a passionate and competitive guy. They believe he can fix the team despite his age. Due to the cap, signing Johnny Gaudreau and staying healthy is key to possibly making the playoffs.

Finally, the Steak & Main sponsors the chat check on Social Media, answering all the fans’ comments and concerns about Philly sports. The audience and Farzy talk about the Garrett Stubbs walk-off. The excitement of winning their fourth series in a row brings confidence as the team heads to D.C. The chat does not like Ranger Suarez as a starter, but Marc states he is the fifth starter. There are no arms to fill the starting role; hopefully, the Phils can make some moves to remedy that.

On the Morning Rush, brought to you by Sky Motor Cars, Game 6 of the NBA Finals between the Warriors and Celtics will tip-off at 9 pm EST. Marc hopes the Warriors can eliminate the Celtics asap! The Phillies are on the road in D.C. against the Nationals. Zack Wheeler will pitch against Patrick Corbin at 7:05 pm at Nationals Park. Let’s go, Phils!